Today is the day. After a year - a tumultuous year - the novella finally went out into the ether and the other 7 novellas in the series are all being launched today on FaceBook.

The launch is the culmination of an interesting journey from pitch, to first 1000 words and on to actually write the whole story. Then editing and more editing and then sending it off for the structural edit and getting those comments back to work on and finally a line edit to pick up as many of the mistakes as possible, which by this stage I can't see anymore, fixing those edits and sending it off to proof stage. Adding the cover and writing the blurb and now finally it is being launched.

The writers are an interesting group of people. I'll just share this link to Aussie Speculative Fiction
where you can read all about them and their novellas and explore what else is available and upcoming on their site.

I realise I need to learn so much more about the tech side of writing. Not having the skills or knowledge that would boost my readership, really does me no favours in this tech savvy world we live in. I struggled with the simplest thing - accepting or rejecting edits in a document. My problem is I just want to write the stories. I want to use my computer I don't want to know how it works. I want to drive my car I dont want to be a mechanic. I want to create stories, I don't want to be a secretary or receptionist with administration and data entry skills, I don't want to be an editor. I have some very good friends who are editors and they do a marvellous job of kicking my spelling and punctuation butt.

Anyway back to the novellas...my novella 'Salvaged' is a climate fiction 'what if'. When I read about the opportunity to write about a future where the world is submerged by 90metres and it was to be part of a series written by other authors, I though - hey I can do this. I was just at a point where I was ready to dive back into writing and really get into the swim of story flow. So I sent off a pitch in January last year. AND THEY LIKED IT, so they asked for the first 1000 words and I said 'What, but I haven't written it yet?'. I wrote the 1000 words in the nick of time and THEY LIKED IT! So they said 'you're in' and I was. Then a shipwreck occurred and the little flotsam from the ship wreck landed in my lap putting a very big commitment bundle in the way of writing. I managed to get a little research done and an amazing woman - Johanna - created some fabulous maps for me so I could see just what the coastline of Australia would look like if the seas rose by 90m. 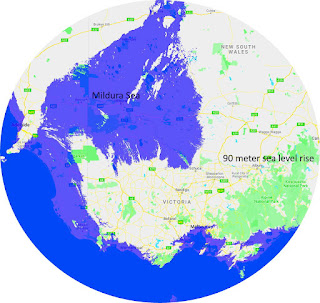 Not a lot left of Melbourne as we know it and two huge inland seas. 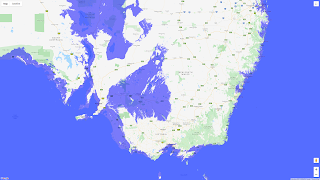 Most of the capital cities of the world would be gone, all the urban centric infrastructure would be decimated and populations would be drastically diminished. 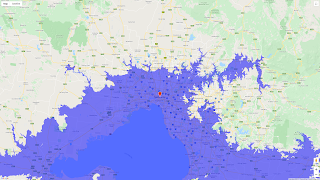 Would we be better people? Would we be worse? Each of these novellas explores aspects of our humanity or lack thereof.

It took me a year to write 30k.
I lie, it took me a month to write a pitch and 1000w. 10 months to do very little writing wise and a little research, a few discussions, a synopsis for something unwritten, a few more discussions and a whole lot of life  going on. In response to a family tragedy I decided on December 27th 2019 to put my head down and think of nothing but the story and I began writing the other 29k. I asked for an extension of time on the 31st and sent the story off at the end of the first week of 2020.
The edits went back and forward over January and I swapped from 7th release to eighth and last so I could be the little red caboose. 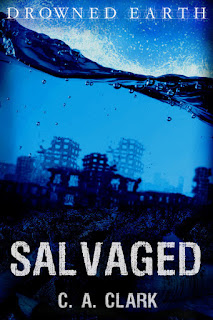